Read Also - The Flip Side 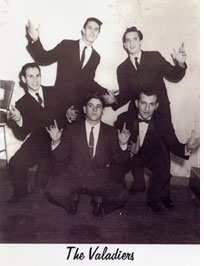 Their initial recording session produced "Nothing Is Going to Change It," and "Somebody Help Me Find My Baby," which Motown shelved. Nothing happened until their next session that produced the self-written "Greetings, This Is Uncle Sam," and "Take a Chance," the B-side. According to Avig, "the sessions took one or two hours for both the vocals and the music." The Valadiers wrote "Greetings," but everyone wanted a piece of the songwriters' credits, the 45 listed only P. Bennent -- who nobody knew -- as the songwriter. When it appeared on a compilation album, the credits listed Robert Bateman, Brian Holland, and Ronnie Dunbar. B.M.I. lists Bateman, Holland, Dunbar, and the Valadiers as the writers. "Greetings" was popular in the East and the Midwest.

The Valadiers appeared in Pittsburgh, Syracuse, Flint, Baltimore, Washington, and other cities with the top names in R&B. On a memorable show at the Cleveland Arena with Marv Johnson, the Isley Brothers, and Wilbert Harrison, the blue-eyed soul singers received a louder ovation than the Isleys. They enjoyed playing hometown spots like the 20 Grand Lounge and the Graystone Ballroom. Lead, Stuart Avig, a 5'4" dynamo, had voice that was a cross between Jackie Wilson and Smokey Robinson; his showstopping voice and demeanor wowed audiences.

The Valadiers' next recordings appeared on the Gordy label. "When I'm Away" (released the summer of 1962) and "I Found a Girl" (January 1963) received little promotion and there were no other releases, and they disbanded by 1964. The Monitors redid "Greetings" on Soul Records and out-charted the original. The Isley Brothers also cut a version that remained in Motown's vaults until the mid-'80s. Stuart cut some solo tracks at Golden World Records as Stuart Ames. He tried to bring Marty Coleman along but the owner, Ed Wingate, only wanted Stuart and squashed the record in its promotional stage. He recorded some tracks, uncredited, with the Reflections ("Just Like Romeo and Juliet") on Golden World.

After that experience Stuart sang around town in various clubs solo, or as the Valadiers, when he could assemble a group. Coleman concentrated on songwriting; B.M.I. lists 38 songs by him, but he wrote more. His biggest was "If This Is Love (Than I'd Rather Be Lonely)" by the Precisions on Drew Records. He wrote and arranged for Detroit's Top Dog label, owned by Artie Fields, and remain with the company until it folded after 11 single releases.

One of Marty's Top Dog songs, "Together We Can Make Such Sweet Music," was redone by both the Spinners and the Supremes & the Four Tops on Motown; Joe Towns recorded the original on Top Dog. When Motown absorbed Top Dog, Coleman fell in as a staff writer, placing tunes with the Originals, Gladys Knight & the Pips, and others. Britisher Ian Levine recorded the Valadiers in the late '80s. Stuart Avig was the sole original member, the other spots were filled by stand-ins. The material ran the gamut and included remakes of the Spinners' "Love Don't Love Nobody," the Isley Brothers' "I Guess I'll Always Love You," and the Miracles' "Ooh, Baby, Baby" with Stuart sounding as good as ever.

Light lives in St. Augustine, FL, while Glasser, Avig, and Coleman all reside in the Detroit area. Avig, happily married for 30 years, has two sons and works in the precious metals business. Glasser also works in greater Detroit, but the once talented Coleman is dogged by substance abuse problems. Stuart has fond memories of Motown and calls it "a rewarding experience."